At the very beginning, I’ll present a short historical overview connected with the appearance of a collar in the male wardrobe. In the 19th century and the first decades of the 20th century, collars of elegant suit shirts were removable, which was an advantage allowing to maintain the undergarment character of the shirts.  The modern shirt form developed only in the mid-20th century and since then it has practically remained the same. Its looseness and, of course, the collar were the only elements that gave way to the fashionable trends.

Before, in the first half of the 19th century, the collar could acquire the most diverse of forms: from high, stiff, and reaching high to the cheek line to large, soft, and widely spread.

Contemporarily worn shirts in the majority of cases have a turndown collar, with 2 exceptions that are pretty rare to spot. These exceptions are shirts with a wing collar or wingtip collar – very often being a source of misconception, which will be later explained – and, located at the other extremity of the formality scale, band collar shirts, that is shirts with…. practically no collar.  When at the beginning of the 20th century the stylish outfits dictated the use of removable collars, shirts featuring band collars were their foundation.

Most common types of collars

Particular collar types differ from one another with their construction, but the differences may be inconspicuous. It’s almost impossible to mistake a wing collar for a button down collar or kent collar, but the differences between the cutaway and semi-cutaway collar styles are rather conventional: it is mostly defined by the angle of collar spread between the collar points. In my classification, I distinguished 9 styles of collars that are most common nowadays. However, it is important to bear in mind that you can find another classification with different nomenclature.

Kent – until quite recently, the most popular collar style in Poland. Currently, it has started to be replaced with semi-cutaway collars. It is characterised by narrowly spread collar points, which increases the likelihood that they won’t hide – like they should – under the lapels of a jacket. When choosing a kent collar, it’s important to pay attention that the collar leaves are of appropriate length. It usually is connected with a high band. A kent collar with narrow points looks very unattractive when matched with a tie and a jacket. 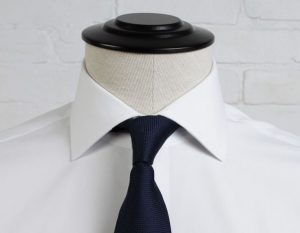 Semi-cutaway collar – it is kent’s main opponent when it comes to popularity among Polish men and is probably the front runner here. It has a slightly wider spread in comparison to kent, and the effect is very visible and spectacular. Its advantage is, among others, that the collar leaves almost always hide under the lapels of the jacket, which looks very neatly. Of course, when it is matched with a tie. A white shirt with a semi-cutaway collar is especially recommended with dark evening suits. Also with a tuxedo, but in this set, the shirt shouldn’t have a front placket, but rather a concealed placket or be equipped with jewellery buttons. This collar style is ideal with both a tie and a bow tie. 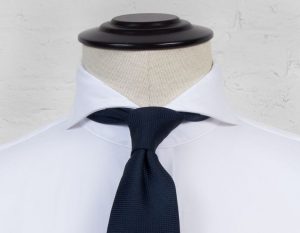 Cutaway collar – known in Poland as an “Italian collar”. Yet, as far as I know, this term is only used in Poland and in… France. But mentioning this country in the Polish counterpart is not that unreasonable. This collar style is ubiquitous in Italy. Among all the famous Italians in the fashion world, probably Brunello Cucinelli is the only man known for wearing kent collars. Sometimes, you can come across a division of cutaway collars into cutaway and extreme cutaway collars. Such extreme cutaway collar style precisely can be found at Pitti Uomo. 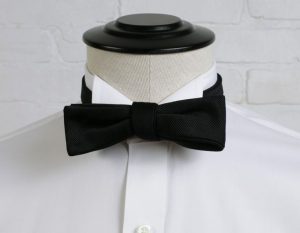 Wing collar – as the name suggests, such a collar style is proper for a tailcoat. Thus, it should be most often seen accompanied by a white bow tie. However, the common practice is to pair it with a black bow tie, which isn’t a mistake after all, as a wing collar has its application in a set with a tuxedo shirt. Such a shirt should have a concealed placket or be adjusted to jewellery buttons. Meanwhile, it is possible to come across shirts with a wing collar and a front placket on the market. This is, of course, a misunderstanding, but it’s also worth being mindful of the fact that there are numerous other misunderstandings connected with the wing collar.

Button down collar – a button down collar represents casual style. That’s why shirts with such collars are never selected for evening outfits, not to mention formal ones. Also, their use in business outfits is debatable. However, they have a very wide application possibilities in casual and semi-casual outfits. It most definitely is a perfect match for everyday suits and co-ord sets, adding a note of play and a specific style. 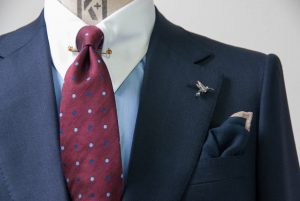 Pin collar – pin collars are more formal than button down collars, but are less formal than semi-cutaway collars and kent collars. However, it won’t be a big mistake, if you choose this collar style for an evening outfit. Of course, under the condition that it’s white. Pin collars and their varieties with a decorative collar pin, instead of a bar, are very stylish and unquestionably attract the attention of bystanders with their distinct otherness. Such collars are most often present in Chesterfield shirts (a colourful shirt with a white collar and white cuffs), making their unique character even more pronounced. 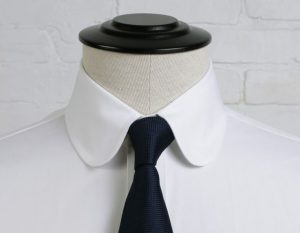 Club collar – among all the above-mentioned styles of elegant men’s shirt collars, a club collar style is definitely the least popular. It can be claimed that a shirt with this collar style is a shirt for connoisseurs and dandies – people well-versed in the realm of canons of male elegance and characterised by high awareness of their own style. A club collar often surmounts Chesterfield shirts (like in the photo above) and can be frequently seen in a version with a bar or a pin. And probably it looks most attractive with a pin.