Tweed – the essence of elegance!

Being an elegant man doesn’t only entail a gradual development of your knowledge, but also dilemmas of everyday nature that will at times lead to a considerable confusion. Taking up this immensely interesting topic, it’s worth referring to the cradle of style that originated in the British Isles and that today is a synonym of what’s the best in men’s fashion.

In this aesthetic definition the first fiddle is played by tweed, a fabric that shaped the perception of English elegance. In today’s post, you will find a historical overview of the origins of tweed as well as vital information that every elegant man should know backward and forward. I think it’s high time to get down to the crux of the matter. 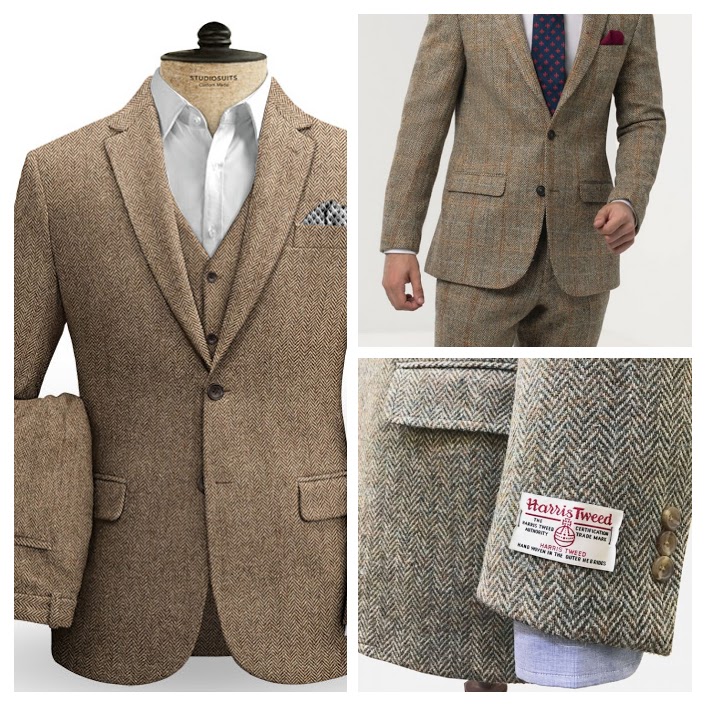 The historical sources are divergent as for the origins of tweed. One of the versions is that the name comes from the name of the River Tweed in Scotland. The second version is more interesting as it claims that the fabric name is an outcome of a mistake made by a London secretary who made a slip of the tongue in 1826, saying tweed instead of twill. Tweed is mainly produced in Scotland, England (Yorkshire), and Ireland. The most prestigious one, Harris Tweed, is weaved in the Western Isles, where you can find such islands as Harris, Lewis, or St Kilda. I need to add that the brand itself is protected as a trademark by the Act of Parliament. Certified in 1909, it is the oldest trademark in the textile world. The provisions of this act are very strict, and they condition the hand-weaving in the Western Isles. Additionally, the fabric has to be dyed with dyes that are sourced from local plants.

Ireland is the motherland of Donegal tweed. The name itself comes from Donegal County in the north-western Ireland, but, contrary to Harris Tweed, it is not a trademark. The characteristic feature of Donegal tweed is the colourful thread visible on the fabric, which makes the impression of being speckled. The intensity and the diversity of the speckles depend on the skilled hands of a person who ultimately takes care of the production process.

HARRIS TWEED – THE MOST VALUED BRAND

The production of tweed has been executed fully by hand since the time when the 6th Earl of Dunmore inherited an estate from his father on Harris Island in 1836. Originally, the wool for the Harris fabric was sourced from the sheep that were bred on the island. First, the wool was washed in soft peat water and then, dyed in dyes from local plants and lichen. Once the wool dried, a portion of a few colours was mixed and then, manually woven from a woollen yarn by peasants. This time-consuming and complex activity resulted in tweed fabrics with thermal properties in stunning colours. In one thread there could be even 21 different colours of fibres. After the Earl’s death in 1843, the duty to run the estate was passed onto his wife, lady Catherine Herbert. It was specifically this woman who spotted and appreciated the versatile properties and application of Harris Tweed.

Currently, Harris Tweed Authority is an organisation that ensures the authenticity of Harris Tweed production. The organisation designed the famous logo depicting the Orb that became the trademark. Signing of products with this symbol is supposed to corroborate that the product is 100% original and that both the production and the origins have been continuously the same for centuries. 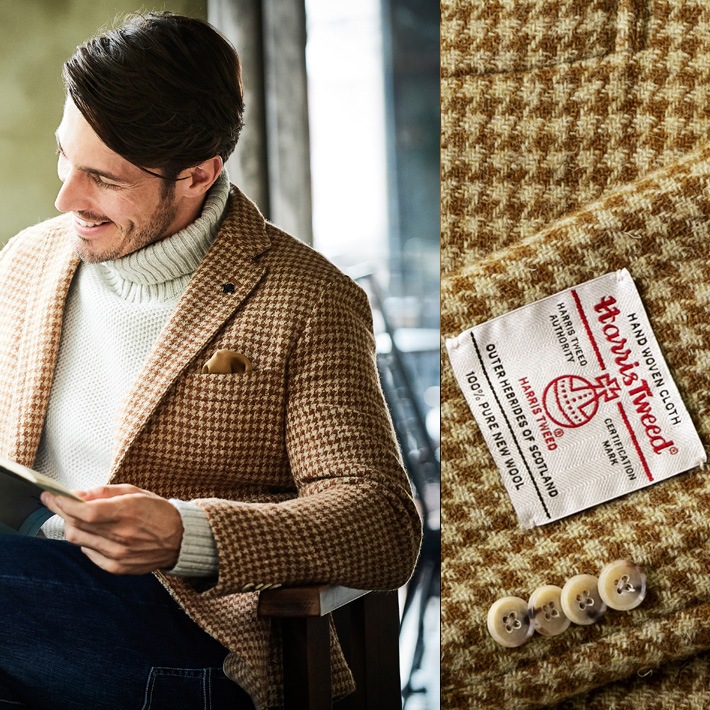 The described fabric is specific: it makes the impression of being stiff and rough, so the initial opinions of many fashion purists weren’t too amiable. Paradoxically, tweed was, however, an answer to the changing weather conditions in the British Isles which were a nuisance to their dwellers. A fabric providing warmth and, most of all, one that is very resistant to outside conditions quickly became popular among the Scottish and Irish farmers who were especially exposed to unfavourable weather. British fashion isn’t characterised by frivolous finesse but by impeccable quality, functionality, and timelessness of cuts that are an inseparable element of the classic canons.

Time is the best proponent in the perception of the advantages of tweed which settled down for good in Great Britain and also on the whole continent. When I think about tweed – I see a men’s suit with an exceptional construction in front of my eyes. A British suit makes the impression of being heavy. The jacket is fastened with three buttons with one vent at the back, topped up with slanted pockets with a ticket pocket. The construction of the trousers doesn’t involve overlaps and creases – the lack of which raises many eyebrows among the majority of men valuing elegance. Lack of a lining in the trousers is a controversial topic.

Tweed is a fabric created to be worn outside when the temperature behind the window forces us to wear clothes that are characterised by being resistant to water and wind, with perfect insulation properties. A classic tweed fabric for a Polish winter should weigh 500-600 g and a coat even 700 g. Tweed, depending on the machine, may have the width of 75-78 cm or 150 cm.

TWEED – FOR WHAT OUTFITS

Personally, I think that tweed looks fantastic in casual sets like, for example a co-ord set with a sports jacket. I think that grey, green, brown hues will be an interesting accent in the autumn/winter climate. The tweed colour palette in its original design was supposed to capture the atmosphere of the British and Irish countryside. A tweed jacket will be perfect with trousers made from different fabrics, such as: corduroy, flannel, and even denim. It’s important that the set doesn’t look like a monochromatic block and becomes a contrast to the jacket. This rule has nothing to do with a men’s tweed suit. As accessories that would highlight the style of the outfit, I’d recommend a cashmere tie in a matte hue. In my opinion, choosing a shirt to match this set is not a simple task, but I think that a button down shirt with elongated points would be an interesting counterpoint. No footwear type is more British than brogues. Precisely this type of shoes in a brown hue will be the foundation of this set.

The modern history confirms the great interest in tweed among the male population. After a period when tweed was forgotten, it comes back in style! Brands more frequently include tweed products in their collections. For me, tweed is about something magical that brings back nostalgia. Another important advantage of this fabric is its practicality as it doesn’t crease. Tweed is tradition that should be promoted!